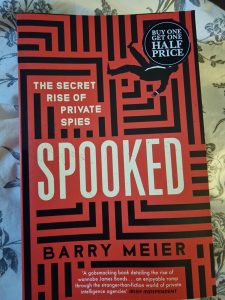 I thought this had the potential to be a bit of a bargain bin book but, apparently, I bought it anyway and it’s been on the ‘to-read’ pile for a while. I needed something reasonably light for this week so I picked it up and I must say it was not quite what I expected. A journalistic, well written account of the particularly interesting and significant world of the private investigator it was. A ‘read on the toilet’ stocking-filler it was not. I think perhaps they mis-sold it with the cover; it’s a tad more sophisticated than it might suggest. Either way, it reads a bit like one of those stylised expose films akin to the Big Short – one where you have to pay attention to all the players and with loads of dialogue.

If you can get past the detail, it is actually really quite interesting and, I think, well balanced, although you can never quite tell for sure. After-all, it’s just one side of a story. Trust no one and all that. 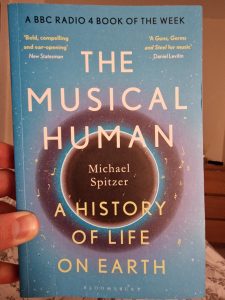 Clearly a very knowledgeable author and a well researched book but I’m afraid this was not what I was hoping for.

Although there were some really interesting insights into music and the reasons we as humans respond to it and to certain types, it delved far too deeply and far too greedily into historical detail. At times, the text was so densely packed with random historical names which seemed as if they had been crammed in there simply because they were there on the research notes. Of course these names and indeed many of their stories were profoundly surplus to requirement in my opinion. The writing was garbled at times, the structure fell apart as a result of all of the above and rather speculative and abstract conclusions and philosophical ramblings were far too common. More than once, I read a sentence that was, to my mind, complete nonsense.

The middle section in particular gave me no enjoyment whatsoever. A shame because hiding in amongst the dry text book like prose, were some interesting thoughts and facts. But I would not recommend this book. To anyone really. 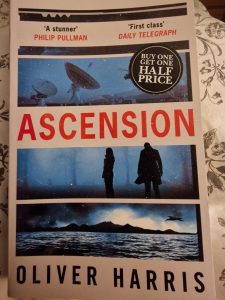 A few pages into this I realised I had made the classic mistake of buying the second in a series, the first book of which I had not read. I was close to abandoning it, but it seemed to me a fairly self contained book with only passing references to the first one. Fortunately, that proved a good move I think. I might now go back and read the first as this was a thoroughly enjoyable spy book.

It follows an agent dropped onto Ascension Island in the middle of the Atlantic to pick up where a murdered colleague left off. All while his handler deals with all the office stuff back in MI6 HQ. Think wire tapping, informants, deep cover agents and secret government organisations.

Well crafted and detailed in the ways of spy craft with lots of internal MI6 politics, drama and an ever-expanding plot that moves at just the right pace. The setting is unique and the characters, though a little generic, are entertaining enough.

It was a little predictable towards the end but that didn’t put me off. Really enjoyed this. I’ll be looking up other stuff from this chap. 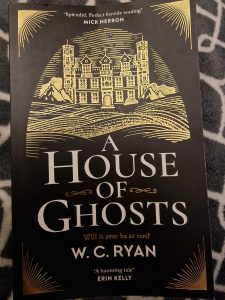 A good one to have read over Christmas. As one of the reviewers has put quite aptly, this is perfect fireside reading.

Set in the early 20th Century, during WWI, it’s a classic closed setting murder mystery with a paranormal twist to it. But, unlike others that might foot that bill (I’m looking at you Stephen King), this enhances it rather than detracts from it. Furthermore, the supernatural elements are not an excuse for lazy writing (I’m looking at you Stephen King). The mystery the reader must unravel is there with or without the ghosts. The spooky haunted house feel justmeans this is a cosy read. It helps that it is written well and that it keeps you guessing. It has some good layering to the mystery behind it so is not too simplistic.

One caveat. The ending seems to be teeing things up for an ongoing series. Not so sure that’s a good plan. This works better as a one off I think. The premise that I suspect will be the basis of the series is not the main draw. Leave it there I say. 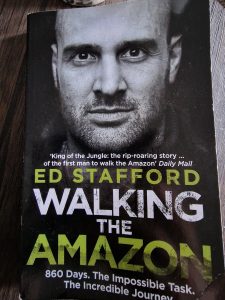 Big fan of Ed Stafford. I have often watched some of his more recent TV programmes in which he attempts to live off the land with nothing more than one set of clothes (sometimes not even that). I’ve been aware of this story for a while (he sets out to walk the entire length of the Amazon from source to sea and in doing so, over the course of two years starts in the pacific and ends in the Atlantic) and have meant to read about it long before now. Only just got round to it and I’m pleased to say it’s a good read. Honest, gritty and inspiring. 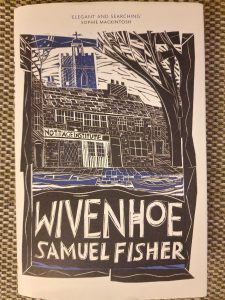 Interesting little book this. One that can be read in a morning or an afternoon (or an evening, whatever floats your boat). It paints a gentle and reflective picture of how relationships within family and community might cope under the stresses of a natural disaster (not so much a disaster in this case, more a fundamental change in the order of things due to the UK freezing over!). Didn’t bowl me over but I suppose I enjoyed it. Well written and very descriptive and assured. 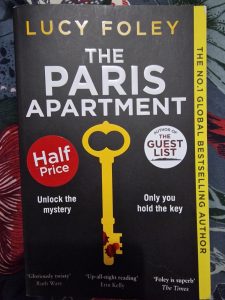 Another impulse buy based on the cover. It’s a good example of what makes a good cover for the genre. A key covered in blood – somehow that just spoke to me! I suspect, what with it being a posh-looking key, it drew me in with that implied promise of glamour and intrigue that posh keys tend to give off. Either way, not bad. Aside from the slightly unimaginative title (to be fair, it does take place in and around a Paris Apartment), it’s a good book. Well written, plotted and the twists and turns are not all completely predictable. Nice easy page turner. Good for a holiday book. 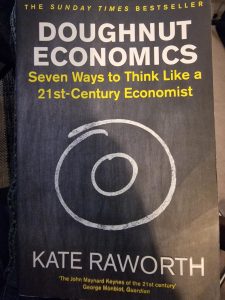 This is an utterly profound book that I urge everyone to read.

For a long time, a thought has been brewing in my head. Why is everyone obsessed with growth? Both sides of the political spectrum are falling over themselves to tell us all how they will grow our economy and make our lives better in the process. I found myself wondering whether I was mad to question this. Surely many of the problems we face in the modern age are linked to growth. Climate, resource limitation, land loss etc.

The population of the planet reached 8 billion just last week. It seems barn door obvious that this cannot go on forever. (And don’t tell me it’s fine because population growth is slowing. That means it is still growing and I don’t know about anyone else but 8 billion is a tad too many in my books). It is blatant that there must be a limit at which we can build more and manufacture more, space and resources being two obvious limiters. The collateral effect on the climate is also something blindingly obvious but is something that many lunatics seem to still deny. Growth seems to be an infinite prospect that we all must apparently crave but the problem is we live on a planet that is very much a finite playground.

Well, a while back I stumbled across this TED talk by Kate Raworth about Doughnut economics and she verbalised pretty much everything I had been thinking about. And then some. Her book goes even further.

It is an unmissable and undeniable classic that explains her ‘doughnut’ theory of economics, one which depicts a ring that represents the sweet spot of social pillars such as climate, equality, peace, land, ocean health, wealth etc. Within the ring are represented the things that we still need to grow and improve upon. But outside the ring is where we overshoot into a realm of profound unsustainability. Not surprisingly, we are not doing very well at staying within this ring.

The book eloquently explains why this inexorable journey in growth at all costs is perhaps not a good idea and suggests ways in which this might be changed.  That it has to be explained is somewhat of a mystery to me, but then this world is a strange place.

Take home message would be that if all countries in the world grew to the stage at which the US, Canada and Sweden do, we would need 4 Earths to sustain them.

Maybe it’s the cynic in me, but the fact that there are such odd, politically selfish and shortsighted perspectives out there, particularly from those in the position to do something, that the measures required to change our path are never going to come to pass.

But either way read the book. Everyone should be forced to do so imo. 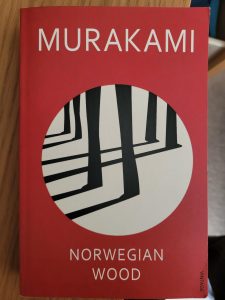 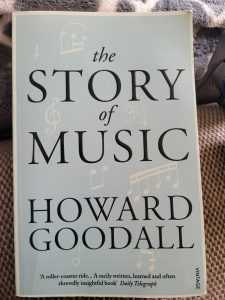 This is a fair old undertaking, so it’s impressive that this book is not as long as one might think. However, that doesn’t mean it doesn’t manage to cram in a lot of interesting stuff. Shore is eloquent and learned in what he writes. There is an enormous breadth of material referenced by him in an assured display of knowledge of his trade.

From my perspective, I found it enlightening in terms of the evolution seen by music. The enormous shifts within the early twentieth Century in particular in a way that things just made that little bit more sense afterwards. A bit like having looked at one’s location on a map and seeing it’s position in the context of everything else around. For anyone interested in music, this is a good shout.