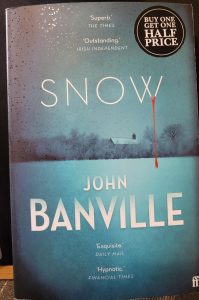 This book is perfect in a way. But only as an example of the dangers of judging a book by its cover. The picture, the wording and the reviews written across it are all exceptional. The Times calls the book itself superb, the Daily Mail refers to it as exquisite and the Financial Times think it is hypnotic. How cheap words have become to these so called newspapers.

In reality this book is absolute trash. I can’t believe someone has read it and thought, yep, that’s publishable. The detective investigating the murder that happens at the beginning is surely the most incompetent of all time. He knocks about for a day or so before asking any real questions. There are clues early on that hint there may be a more sophisticated plot at hand. Not so. They are never really addressed and the plot is as one dimensional as it could possibly be. It is a short book but, due to the total lack of substance (you could sum up the whole ‘mystery’ in a short sentence) the author has had to pad it out with pointless detail of such boring irrelevance that, if I ever was placed next to him at a dinner party, I would rather go hungry.

It should be studied by writers as an example of how not to write. At one point, the main character’s colleague goes missing for an hour or so and, for some incredible reason, the main character ‘knows’ that he is dead. A classic example of telling the reader rather than letting them discover for themselves.

One of the worse books I have ever read.