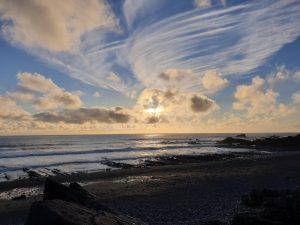 You may or not remember my wild camping trip last year with my mate Rich. It was such a success that we vowed to do it again. This is the one where we do it again.

This time, we decide to get a bit more ambitious. A number of years ago Rich and his wife decided to abandon me and move down to the coast. Treachery aside, it does mean that I have friends and (crucially) a base in Cornwall from which I can stage an epic camping trip if needed. Rich has had his eyes on the south west cost path (a pathway of such significance that I was unsure whether or not to capitalise it – having just looked it up, it turns out I should have done) for a while now. This path extends for 630 miles from Somerset all the way round the Devon and Cornwall coasts, ending up in Pool in Dorset. It even has its own website. For a path, I think that is pretty impressive.

Our aim for this trip was to tackle a small section of it over a couple of days, camping on the open road each night while we did so. Rich’s plan was to start in a small, innuendo-friendly bay called Welcombe Mouth. From there we would camp our first night and set off southwards towards the town of Bude and, should the wind be behind us and the carbohydrates within us, beyond.

Logistically we (I) was struggling to see how we could start in one place, finish in another and then exfiltrate ourselves using the same infiltration method we’d started with. I hadn’t counted on Rich’s excellent wife who was happy to drop us off at the beginning and pick us up when we’d had enough a couple of days later.

Trip sorted. The weather is another issue. Of course for the entire journey there, it pelts it down with rain, but as soon as we arrive in the welcome mouth of Welcombe Mouth, the rain leaves us and the evening sun creeps out from behind the clouds in a really rather generous fashion. As a result, the waterproofs never see the light of day.

For dinner, we build a fire on the beach, strewn with logs and pebbles after a brief discussion on whether the tide is likely to swallow us up before we’ve even opened up our beers. We decide it won’t, so we open up our beers. Proven correct, we enjoy a seabass and vegetable foil dinner that Rich had already prepared. Such is the quality of this meal that, frankly, I would have been happy with it in a posh restaurant. Aside from a rogue pocket of hot slate that explodes out of the fire and a small rockfall that falls on the exact spot we’d initially set up on, we enjoy a superb evening looking out onto the open ocean. The vista we look out on is worthy of a desktop screensaver. 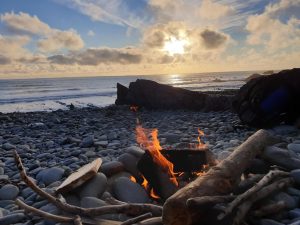 As night falls, we set our tents up on the cliff and, apart from a lone van in the car park, we are the only ones in the whole valley. At one stage, just as the light is all but gone, I become convinced that the headlights of the van flash at us from across the other side of the stream that runs through the valley. “Doggers,” says Rich casually. I can’t quite tell if he is joking but from that point on, I keep a close, untrusting eye on that van until we leave the next day.

Generally speaking, during the nights when I am camping, I invariably get a very cold nose. This one is no exception. I’m convinced it is ever since I got an elbow to the face while playing football. As we pack up the next morning and hike out of the valley, tents and all on our backs, I speak to Rich about my idea for a nose cosy. I would call it a ‘nosie’. He doesn’t really say anything but, tellingly, neither does he laugh so I can only assume he loves the idea.

The path itself is breathtakingly scenic, something we discover through the course of the morning. Nothing quite beats looking out on a sunny seascape whilst watching a frolicking seal in the surf. On the other hand, quite a lot of things beat lugging a backpack of a weight equivalent to Matt Hancock’s conscience up and down the steep sides of each valley. The coastal path is rife with streams running into the sea, each with its own deep carving through the cliff tops and so what is quite a short distance as the crow flys turns out to be a hell of a lot more in reality. After one particularly strenuous climb, Rich almost bunders into a hedgerow just as a nice lady bids us a good morning. Ah to have been a crow. 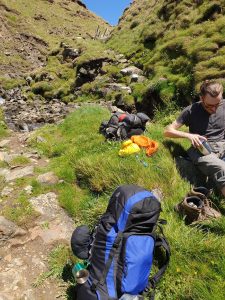 By midday I feel like I’ve worked my gluteal muscles so fully that I would feel reasonably confident opening a can of baked beans using just the cheeks. Lunch is taken in a small gulley through which a babbling stream runs and from which we replenish our water supply. Luckily Rich has one of those water filters so thankfully neither of us subsequently die as a result. I come up with the idea of camping slippers.

After lunch, we set off back into the Cornish countryside (we had already crossed the border from Devon to Cornwall earlier that day). As we approach a cool-looking government radio station, we pass some walkers. Not just any walkers though; they mean business. I hadn’t realised but the South West Cost Path (capitalised) is kind of a big deal and people really do go all in on it. If you’re trying to do the whole thing then to miss even a small section out is sacrilege. Such is the opinion of the cheerful gentleman who passes us coming the other way. Apparently we are on a small detour inland which he too has mistakenly taken. He informs us cheerfully that he is retracing his steps in order to ‘do it properly’. It can only be a few 100 yards difference.

It’s a long afternoon of hiking but we eventually make it to some semblance of civilisation (a café on a fairly isolated surfing beach) where we grab some drinks and realise we have both been cultivating an impressive sun burn on our faces, necks and arms since we began earlier in the day. I buy some sun cream and aloe vera (pricey) and a snickers (affordable).

We begin to debate where we are going to camp. It is tempting to retrace our steps a way to a suitable spot seen earlier. The opposing temptation however is to carry on, even though we are approaching the outskirts of Bude, making it harder to find a place to camp without being blatantly obvious. We choose the latter option and live to regret it. More quickly than we had anticipated, Bude looms into view and we are forced to get a bit posh and pay a local farmer £10 to camp in his field. Not quite wild camping then but we do have access to one of the best equipped portaloos I have ever had the pleasure of using. We have noodles for dinner with a view of the ocean over the cliffs and I note how manly my hands look as a result of the work they have had to take on during our journey. I invent the word mands which I think is my best suggestion yet but Rich doesn’t look so sure. 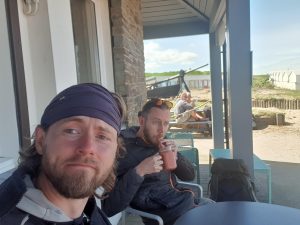 The next morning we pack up and head into town where we have an excellent fry-up and a big coffee, (Rich has some sort of mocktail that I don’t know the name of). I buy some more butane for my camping stove in a department store straight out of the 80s after which we climb out of Bude back onto the cliffs to continue our journey.  I stop at one point to look at the lifeguard trucks below. Purely by coincidence, I have been watching a lot of Baywatch recently and I get a bit excited.

We stop every so often to apply our newly acquired sun cream and I eat a protein bar that tops any other protein bar I have ever had. As we grow wearier, we decide to pinpoint our exfil site – a beach not much further where we can eat lunch and await Rich’s wife to rescue us. The beach we get to is a bit ropey to be honest. We pass the ‘Beach House Hotel’ which looks like the house from the Texas Chainsaw Massacre and decide to eat instead at the local café. I’m glad we do as the tartar sauce sachets they have there are cutting edge.

After lunch, we decide to retreat to the one pub in the bay for the final stages and, in contrast to the scenic tranquillity of the British coast we’ve just experienced, we witness the human element to this landscape. We watch with interest as five generations of one family race around on the mini go kart track outside as we sip on much anticipated pints of Doombar. There is a parrot in a cage in one corner and a child plays nearby who we can only assume is feral. In fairness to the locals, the breeding pool is small.

Overall, we’ve thoroughly enjoyed our journey over the last 2 days. According to Rich’s calculations, we have covered 15 miles and 3,000 feet of elevation. Rich is keen to get home now to address the ‘chafeage’ he has endured around his waistline (of all places) and I need to apply ice to my shoulders which feel as if they have been compressed beneath several tonnes of Matt Hancock’s promises.

Warning: A non-numeric value encountered in /home/customer/www/wilfredjames.blog/public_html/wp-content/plugins/insta-gallery/includes/models/Account.php on line 83