This is a hefty book that is the followup to Shantaram which I enjoyed. I think on the whole, I liked this better. It’s a long book but at no point did I get bored. It is heavily philosophical to the point where some people I think might find it a bit pretentious but I am not one of those people. The characters are well rounded and believable, if not a bit exaggerated. It’s a bit of a fantasy world in a way but gives a feel of such a different way of life to my own that it peaks the imagination.

Some lovely writing…”Moonlight wrote tree poems on the road”. 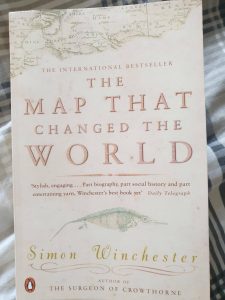 This is a book about rocks. There’s no two ways about it. As such, it can be a bit dull in places. The author, well-renowned as he is, does get a bit carried away with the rocks every now and again which if I’m honest was a slight struggle. However, I realise that without the rocks, there isn’t a book here. Surrounding these passages is an interesting biographical journey set in the early 1800s which I always find interesting. I would say there is a slow patch in the middle of the book but it finishes strongly. Not for everyone, but not the worst book in the world. 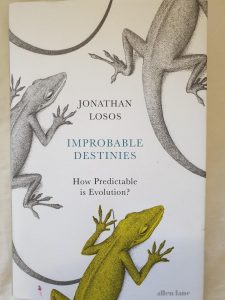 This was really good. I was a bit concerned that it would be just another book about evolution about which I know a reasonable amount. However, it actually explores in reasonable detail the questions as to whether evolution is convergent (the phenomenon in which creatures will evolve simialr solutions or exactly the same solutions to selection pressures independently). Lots of detail about various studies and research projects which may not be everyone’s cup of tea, but the author knows how to write in an accessible and light hearted manner so it’s not too dry. 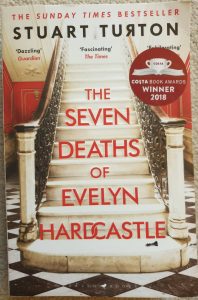 After my last book, I needed something that I cold devour. I had heard good things about this one so I took a shot.

What can I say, other than this book has shot its way right into the top five, maybe even top three books I have ever read. It is awesome. The premise is that of a traditional murder mystery in a country estate, the idea of which I love. But, the added feature here is that there is a sort of supernatural aspect in which the main character lives the day of the murder several times, Groundhog Day-style. Knowing this, I was cautious.

The thing with this is that it would be so easy to get it wrong, or not put enough into it. Not so with this genius. He’s absolutely nailed it. My mind boggles when I think of all the tangled pathways he must have had to have in his head to make this work. But it really does. Bloody awesome. Read it as soon as you can. Apparently his second book is even better!

This has been on the shelf for a while but the moment felt right to read it. The book itself is lovingly presented. It feels premium and special. Unfortunately the actual written contents left me really struggling. For a start, the subject was based upon an enormous amount of conjecture and guess work, as the author herself freely admits. This made it feel immediately as if I was wasting my time a bit.

Although the general feel of the time and the world in which the key players lived interests me, it was presented in such a dry manner that I got bored very quickly. So much unecessary detail – at one point, she spends about three pages just listing books published by the publishing company at the centre of it all. It reads like an essay overall. The author may be lovely and it remains entirely possible that she is an incredible entertainer, but on this evidence, I would certainly choose to sit as far away from her as possible if we were attending the same dinner party.

Avoid unless you just want your bookcase to look nice. 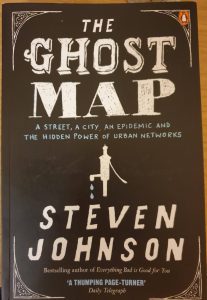 This is a fairly interesting account of the famous cholera outbreak in London in which John Snow made the connection between contaminated water and disease. Fairly averagely written. Reasonable book but I wouldn’t go out of your way to buy it!