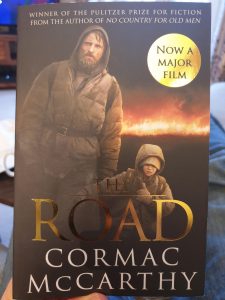 This was a bleak book. It’s not long by any means and has no chapters – relentless then. Just one continuous ream of bleakness. That does not make it a bad read though. Quite the contrary, it is almost poetic in its literary credentials. The prose is descriptive and wraps you up in this post apocalyptic world, engrossing you in the father son relationship at its core and making you think on the merits of survival itself and of the impacts we have on the world and each other. I’ve not seen the film. I don’t really want to. But the book is great. If not a bit depressing for the current times!