We watch a lot of rubbish on our phones these days. While I may not be captive to the drudgery and soul sapping likes of Tik Tok and stuff like that, there is still a place for such mindless nonsense in my life. I talk of that specific point of the day in which you are tasked with something mundane but necessary. Making breakfast for example, or putting clothes on (not always necessary but, in general, recommended). Although I will occasionally binge something suited to background comfort viewing on the Netflix app, You Tube tends to be my go to medium for such things and I watch a plethora of useless output while I’m pottering around the flat. From videos of other people playing video games, some guy talking about watches, pens and spreadsheets (don’t ask), videos of what people carry in their pockets, the occasional compilation of people getting hit in the face with balls (my all time favourite thing) and, most recently, videos of people going camping.

In particular, credit here must go to a chap called Steve who has a channel called ‘Camping with Steve’. In it, Steve goes camping. It’s a simple as that (although the episodes where he goes stealth camping do add some variety and excitement to proceedings). Steve is an ultra-chilled, super friendly Canadian who takes the viewer on a trip into the Canadian countryside and allows you to imagine for a second that you are along with him on a nice sedate trip, away from the noise and responsibility of everyday life. Occasionally, he’ll bring along a mad looking gent with long hair and one of those beards so substantial that it muffles your voice, whom he refers to only as ‘Crazy Neighbour’ but whether accompanied or not, there’s something relaxing and calming about it all. 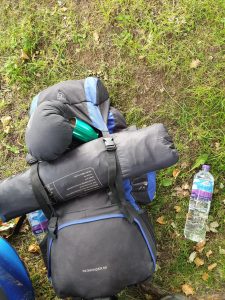 So it is then, that I am now standing next to my car in a small gravel layby alongside a sleepy village green in the middle of nowhere, as if I’m a spy waiting for a drop. My bag, laden with the new equipment I have accumulated over the last week or so, (much of it snatched up in a frenzy from the, frankly obscene, sale the local Millets were putting on), lies on a grassy bank nearby. I am waiting for my mate Rich who will be my companion for the next 24 hours or so. My girlfriend has already made it clear she is ‘not up for it.’

Rich pulls up in his car, all suited and booted, straight from work. Like Crazy Neighbour, he too has long hair (that I have always been very jealous of) and a beard, but his attire does not paint him as someone about to embark on a wild camping trip. He dives into the back seat of his car to change and emerges looking like a different man. He now wears all green and camo, sports an army issue back pack and, with his hirsute appearance, looks as if he is just about to join a sit in for Extinction Rebellion.

‘It’s a short 30 minute walk to the spot’, he tells me cheerfully. Rich has been here before and knows the area better than me. As we set off, it’s a good chance to catch up as we’ve not seen each other for a while. We soon pass some ridiculous houses; the sort that have remote gates and the actual house is too distant from the road to be seen clearly.

I have quite a lot of stuff in my pack, including a tent and it quickly becomes apparent that this is not a ‘short 30 minute walk.’ My knees are screaming at me but I don’t let on so as not to lose face. Rich seems unphased by the slope we are descending while all I can think about is the fact that we are going to have to climb this again in the morning.

Like an accomplished Sherpa, Rich guides me first along undulating paths and then into woodland (at one point identifying a rare type of fern as if Ray Mears himself were here with me) and soon, down a perilous slope which we have to edge down sideways. Arduous as this is, it’s great to be outside in the fresh air doing something a bit different. I see the glisten of the river through the trees and I know we’re almost there. 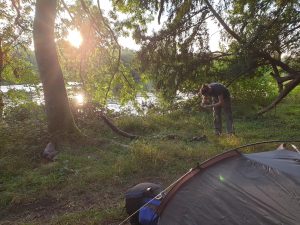 We reach the bank of the river and move northwards along it, past loads of rubbish left by wankers. This is why wild camping is not technically legal, we remark to each other. Not much farther, we find a perfect spot to set up camp and we crack open a couple of beers to celebrate. As we sit on a log by the water, we watch an Aryan-looking cohort of public school boys row past us. (Collective noun for posh public school boys? A cox-less four? A Parliament??). Instructors wail at them through megaphones from motor boats.

One lanky kid in a single tries to take a rest, completely unaware we are there a few feet away and watching with amusement. From some way away, he is suddenly told via megaphone to ‘get the bloody hell on with it.’ 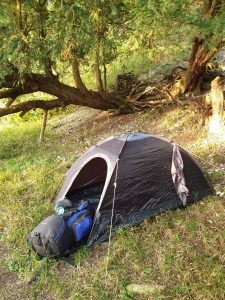 As the sun begins to set, we set up camp. I pitch my tent while Rich strings up his outdoor hammock. (Of course he has an outdoor hammock). I must admit, it looks pretty badass. There is a brief moment of horror as Rich discovers what looks like a lower jaw bone tucked into the trunk and it takes us a few moments to reassure ourselves that it isn’t human.

Next up we have dinner. I have managed to pick up some pretty nifty cooking stuff and I quietly congratulate myself on not only this, but also the fold up stool that I am sitting on as I cook; arguably the best thing I’ve brought with me. I heat up some tomato lentil broth with some delicious veggie sausages mixed in and I can honestly say I would be pleased with that in a restaurant. Quite the woodsman, I think to myself. 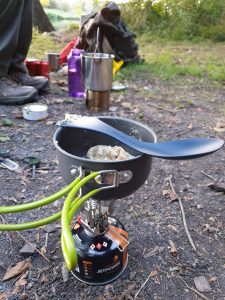 As the sun gives its last, we gather some firewood and light a small fire. As we compare notes on Netflix and Amazon programmes to ensure neither of us has missed anything awesome, we hear a rustle in the bushes. So dense is the darkness by now that not even my awesome head torch can make anything out. With the severed jaw in mind, we retire for the night, Rich to his hammock and I to my tent. It’s a comfy night and it is not long before I drift off. The next time I wake, it is still pitch black but I can hear rustling in the bushes again, this time closer than before. It’s fine, I tell myself. Rich has probably just decided to have a wander. The trouble is, I need a pee. I remind myself that this is the UK and it is unlikely there are any wild animals out to get me. (I am reminded of another time when I was camping in the Rocky mountains – legit bear country – this time in the same tent as my mate Dave who woke in the middle of the night having suddenly realised that the rustling outside our tent might have something to do with the sandwich he had left in his pocket.)

I leave the tent, take a piss and am not mauled to death or indeed horribly murdered. Other than distant machinery, probably work on the railway which is not too far from here, the night is otherwise unremarkable and come morning, I feel pretty satisfied. Rich tells me he has also had an alright night but was perhaps a bit cold and I am not sure if he senses my smugness.

While sitting on my trusty stool, I brew some tea and cook some bacon on my stove as the mist rises from the river. The tranquillity of the moment is rudely interrupted by the sight of an enormous spider crawling up my jumper towards my throat, which I have to get rid of pretty sharpish. I briefly remember a moment when, half asleep, I brushed something from my face; I thought this was my ever growing hair (my aim is to be as long as Rich’s) but I now realise that the spider was most likely with me all night.

This aside, it has been a huge success. Full with bacon and tea, I pack up my gear and as Rich and I walk back along the banks, we spot two nutters swimming down the rider with dry bags pushed in front of them. Lo and behold they reach the bank next to us and climb out. One guy is literally just in his pants.

‘Ya, hi guys. Did you camp out last night?’ (said really poshly).

We confirm to them that we did. It turns out that these two like to go for runs, then take a dip in the river midway through before trail running their way out again. Sure enough, a bit further along we are overtaken by the two of them, this time clothed, thank God. While Rich and I lug our massive packs up the impossibly steep hill, they prance by energetically, giving us a friendly lycra clad wave.

The familiar creek of my knees gradually returns. We have done our bit and taken away as much of the rubbish left further down the river bank as we can, so we are still weighed down somewhat. Halfway along, it is Rich that signals for a rest. I make out like that’s fine, if he needs it. In reality, I am rejoicing.

As we reach the cars, I realise we have made it and without a hitch. Rich’s expert location scouting has done the trick and though we part ways, it is on the understanding that this is but the beginning. I could really get into this camping thing and it beats just watching other people do it on You Tube! 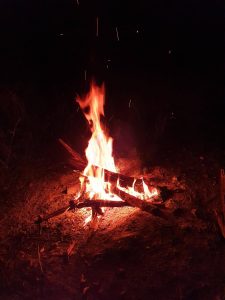