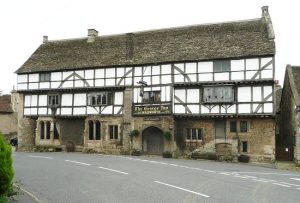 Before I go any further, I don’t believe in ghosts. I will admit, however, that I suggested to my girlfriend Rachel that the hotel we were staying in this weekend looks haunted.

This was, in retrospect, a bad idea as it turns out Rachel does believe in ghosts. Cue a quick google search for ‘Most Haunted’ and, lo and behold, our destination has been the focus for ghost hunters on several different occasions. It turns out it really is haunted!

We read some accounts from former visitors, one of whom claims to have seen a figure standing at the foot of his bed and another sensing pressure on the mattress, as if someone was resting there next to them.

Rachel became rather transfixed on staying somewhere else after that but, despite her protestations, our weekend booking remained in place.

The George Inn, situated in the village of Norton St Philip, is a 15 minute car journey from Bath. Neither of us had been to Bath before, so it was an ideal destination.

We arrived on a blisteringly hot Friday afternoon, me looking forward to relaxing for the weekend and Rachel bricking it far more than I had come to realise.

The George Inn looks haunted. It really does. Standing 4 stories high, it looks distinctly medieval with its thick wooden beams and its curved and warped walls, all askew. It is apparently 700 years old and claims to be the oldest inn in the UK.

Upon our arrival we are met by a pleasant but harried hotel employee, all masked up for Covid. Immediately Rachel asks if it is haunted, to which he replies with a well rehearsed speech that he has not personally witnessed anything but others certainly had. In my opinion, he gives only enough information to maintain the mystery. Clever.

We  are shown to our room, the King Charles room, up a creaky wooden spiral staircase on the 1st floor. The floor slants towards us so much as we enter that I’m sure any loose items would rush out of the door. A huge wedge is necessary under 2 of the 4 legs of the bed to keep it level. A portrait of a suitably unimpressed King Charles sits on one wall while a tapestry of a medieval polo game hangs above the bed.

Elsewhere, other ancient drawings in the characteristically child-like (shit) style of our ancestors fill the gaps on the other walls. Rather excellently, the hanging sign for the inn is directly outside our window and it makes a creaking sound in the wind. Rachel looks a bit pale.

We drop off our stuff and we go for a wander around the village. It seems very quiet and sleepy; a crossroads village really although it used to be big in the wool industry apparently. The view of the church against the backdrop of the fields beyond across the village green provides a photo op.

As we walk, we discuss the possibility that the entire village is a front for an MI6 base. Rachel laughs this off but I’m not so sure.

We linger in the church graveyard and look at some of the gravestones – some ancient, worn and overgrown and others fresh and well tended. Further on we pass a dried up stream and an oddly placed apple, rotten as if from the opening titles of the Walking Dead. Perhaps most chilling of all, I notice a cuddly toy (a rabbit I think) as it lies face down in an overgrown driveway next to some rusty swings that creak slowly in the breeze. I don’t tell Rachel.

Back at the Inn, we take a peek into the ‘dungeons’. This sunken area is cooler than outside and has been turned into a sort of second bar area/ function room. From the chains hung on the walls, its original purpose is clearly not forgotten. The story goes that a group of rebels who fought with the Duke of Monmouthsire in his rebellion to overthrow King James II in the late 1600s, were housed in the inn the night before their execution just over the road.

Legend has it that a guard was also executed by mistake – a chap known as ‘the innocent bystander’. A chilling room then – in more ways than one – but though it keeps Rachel uncharacteristically quiet, I can’t help  but notice it has an excellent sound system.

We eat dinner at the George  a bit later on and, bolstered by some Dutch courage, Rachel collars the landlady and probes into the hauntings a bit more. She is as evasive as her employee from earlier on, very much the party line I think. However, she throws Rachel one snippet of info – another guest having apparently seen or felt something the previous night.

Armed with this news, we retire to our bedroom, this time under the cover of darkness at which point a vital and thorough conversation takes place. Which lights should remain on?

My argument is that all lights should be off. From a purely clinical point  of view of course, that’s just good sleep hygiene. Rachel argues the complete opposite. Fortunately my argument wins out and we settle in for the night.

It’s 2.08 and I am shaken awake from a deep sleep. I have been efficiently working my way through some sort of checklist in my dream – a list that I am nine tenths of the way through. It is a list that I will now never know what it feels like to complete.

I look to my left where my eyes meet Rachel’s, wide in the moonlight.

‘Nothing,’ comes the reply.

Clearly nor now can I.

This goes on for a bit and eventually I am asked to stay up and read while Rachel goes to sleep. I cast my eyes around the room, searching the shadows for any obvious ghosts. There are none.

With a sigh I sit up and get my book out – a non-fiction about the periodic table. Even despite the fact that it is bloody boiling, this is not the sort of book that is necessarily suited to staying awake at such an early hour and, though I really do give it a try, the next thing I know it’s morning.

Breakfast consists of wheetabix, a cup of tea and one of my top 5 rated croissants of all time.

I receive quite a detailed account of the night from Rachel’s perspective. I hear a lot about noises from the floor below and about the creaking sign but no concrete evidence of any ghosts.

My attention wanders to the impressive ‘George Inn’ branded napkins which are of such high quality that I hesitate to use them.

To get Rachel’s mind off the upcoming night number two, at one point seriously under threat in favour of a Premier Inn, we spend the day in Bath.

It’s a great day. We walk to Pulteney Bridge, which I read was built in 1774 and stands out due to the shops built into it. From there we take a walk around the market from which I buy a notepad to record some travel notes. I flirt with buying a flat cap which I have felt for a while would really suit me. Rachel says no.

We have lunch at Bill’s although Rachel is almost denied entrance after recording a high temperature upon arrival. It turns out their thermometer is tricked by the warmth of her forehead from standing outside in the sun. Strange times we live in.

From there, we spends a few hours exploring the Roman baths, glasses of prosecco in hand. It is genuinely interesting and the audio guide is good (not as good as the one at Alcatraz though if you ever decide to visit).

We both decide to upgrade our face masks in WH Smiths of all places. Now looking flush and significantly cooler in our sleek black masks, we head for drinks in a bar and from there onto a converted railway station to eat Italian food and listen to some live jazz. The drummer reminds me a bit of Jim Broadbent.

I’m impressed with Bath. It is genuinely unique, with its sandy stonework and its sunken valley setting. Quite alternative; a bit like nearby Bristol or faraway Portland, though perhaps lacking the edge of those places, a bit more self contained and certainly without the same amenities that a bigger city might have. For those seeking a quiet and scenic existence, almost certainly a nice place to live.

Back at the inn, it’s night 2. Before we go to our room, I see someone in the bar that looks a bit like my brother-in-law’s sister-in-law. When I point it out, Rachel doesn’t care for some reason.

To my surprise there is relatively little fuss as we settle down but once again, later that night I am awakened by a now terrified Rachel. She has heard something.

‘Did you hear that?’ she asks.

I shake my head, eyes barely open. We lie and listen for a while but there really is no sound at all. Through-traffic seems minimal at night; a real plus point I would say for the village of Norton St Philip.

There follows a very serious conversation about whether or not to sleep in the car but we decide that ghosts could probably access the car park as well as they might the King Charles room. I do my reading thing again, this time managing to stay awake for a bit longer. I learn a bit about sulphur and its biblical applications before I fall asleep again.

The croissant in the morning is not nearly as good. It must have been a freak batch the day before. Rachel looks very tired but is at least relieved that we survived the night. Only now we are leaving does the landlady reveal more detail, spurred on by Rachel’s enthusiastic questions. It turns out that another guest, seemingly unaware of the spectral nature of the inn had reported sensing the presence of someone in his room the night before last. I note a visible chill run down Rachel’s spine as the story is told, particularly when it turns out the seemingly obvious guest had described seeing someone in guard’s uniform in the darkness.

I don’t think Rachel will ever return to the George Inn, but that’s not to say we didn’t enjoy the weekend. Over a roast on the route home, we discuss whether she would try any other haunted locations. She says no.

I remain hopeful though. And who knows, if any other vacancies at haunted hotels pop up, who’s to say I won’t be able to convince her to book a night or two again? Especially if she doesn’t know it’s haunted 😉