While the pancreas may not be one of the A-listers or showstoppers of the organ world (if there is such a thing), it is as important as any other cog in the system. For a long time, perhaps owing to its position behind the stomach, its true function was completely unknown. It is curious in appearance, shaped a bit like a leaf and rubbery in texture (apparently). This gave rise to a certain vagueness in its naming – it means ‘all flesh’ in Greek. Until the late nineteenth century, many thought its only function was as a shock absorber in the upper abdomen just below the ribs and the sternum. 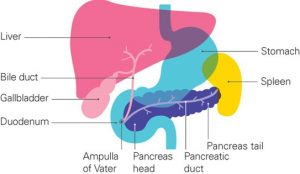 The discovery of a sneaky duct that connects it with the first part of the small intestine was the first clue that it might have a deeper role. It was then discovered that the pancreas secretes a rich cocktail of juice and enzymes through this duct and into the intestine in order to help with our digestion. Specifically it helps in breaking down fats (with an enzyme called lipase), starches (with amylase) and proteins (with various different proteases). Basically, anything with ‘ase’ at the end generally means it is an enzyme of some form or other.

This is important because, without the ability to break these dietary components into smaller building blocks, we would not be able to absorb them from the intestines into our bloodstream. In addition, the pancreas produces lots of bicarbonate (an alkali) to neutralise all of the acids secreted in the stomach so that once your food gets into your intestine, it is at optimal pH for absorption.

That role alone is extremely useful you might say, but the pancreas is not finished there. While its function in digestion relates to what is known as the exocrine system (essentially ‘exo’ means outside and the digestive system is classed as ‘outside’ because it begins and ends outside!) the pancreas has a vital endocrine role. Endocrine relates to the travels of hormones throughout the closed circulatory system, i.e. the blood.

In those years where scientists considered the pancreas to be nothing more than a glorified cushion, hormones controlling the body’s sugar levels were thought to be pumped into the circulation from the brain. This idea persisted until a chap called Langerhans identified in 1869 an area of tissues in the pancreas different from the rest. When these areas were (rather cruelly) removed under anaesthetic from dogs, the animals went on to develop features of diabetes.

Through various means subsequent to this, it was proved that these ‘islets of Langerhans’ (useful to know for pub quizzes) secreted hormones, the first of which discovered was named insulin after the Latin term for ‘islands’. We now know that the pancreas also produces a second hormone called glucagon as well. As part of the endocrine system, these hormones are secreted from the pancreas into the bloodstream and it is here that they perform their vital work.

Insulin helps the cells around the body to take up sugar from the blood stream to use as fuel and also helps to store it in the liver. Glucagon performs the opposite role, mobilising energy stores in the liver and fatty tissue for those days when we’ve not had time for lunch or have decided to run a marathon.

In this way, to use a rather crude comparison, the pancreas is a bit like the national grid. When it receives certain signals that more energy than usual might be required, like going for a long run (just as TV coverage of a royal wedding, for example, might cause a surge in electricity uptake, to keep the national grid analogy alive), it prepares by secreting more glucagon to draw from the reserve of energy we keep stored in our livers and fatty tissue. If, on the other hand, we are providing more energy than we need by eating lots of sugar, the body switches to insulin to use up the sugar being eaten and store any spare energy left over.

So evidently the pancreas when it is working well is extremely important. When it is not, diabetes can result. But what else might go wrong?

Sometimes, the pancreas can become inflamed and this is known as pancreatitis. Every medical student will most likely know (or at least have heard of) the pneumonic GET SMASHED. Each letter represents a potential cause for pancreatitis, the two most common being Gallstones and ETOH or Excessive Alcohol. ‘S’ stands for Scorpion venom and, as there are not many scorpions running around Henley, I’ll not dwell on that too much.

Pancreatitis can range from the mild to the severe and can even be life threatening. Symptoms include severe upper abdominal pain going through to the back, nausea and vomiting. You may also sometimes get a fever and also diarrhoea. It often results in a stay in hospital where you can receive pain relief, fluids and oxygen if needed.

The other main condition affecting the pancreas is cancer. Pancreatic cancer is the UK’s 11th most common cancer and tends to affect those in older age groups more. Around 9,600 people in the UK develop pancreatic cancer each year.

The big issue with pancreatic cancer that gives it a high mortality rate is the difficulty in its detection. This means that it is often picked up only at later stages. Researchers are always looking for effective tests that might be used as a good screening tool, but as yet none has been found. The symptoms are often very vague but include…

-Dull, boring pain or fullness in the upper abdomen which can go through to the back as well

-Jaundice, often without pain or any other symptoms (this occurs because of the pancreas’s proximity to the bile duct which, if pressed on, causes a back-up of the pigment bilirubin in the blood.)

One in ten cases may have a genetic element so, if a family member has had pancreatic cancer younger members may sometimes be screened.

If you are at all concerned about this, it is of course always worth coming to see your GP for a check.

As always, there is always more to learn. Even now, research is being done into other hormones produced by the pancreas which may perform roles as yet unknown, thereby, in the future, potentially opening up different possibilities for the treatment and understanding of various diseases, including diabetes. For that reason alone, I think the pancreas deserves a little more time in the limelight.