To say our bodies are complicated is somewhat of an understatement. The number of processes each one carries out every second is staggering. From managing all the thoughts racing through your brain, digesting last night’s dinner, pumping oxygen into the blood from the outside world and contracting a select group of muscles just to stop you from falling over, it is in perpetual activity even if it doesn’t always seem like it. The organs of the body take on all these different roles, each one vital to the workings of all the others.

For now, however, I will focus on one of the most vital of all our organs – the heart. For obvious reasons, it is pretty useful. With every beat, it pumps blood into the arteries taking with it all the vital components of the blood into your tissues and all the other organs of the body as well. Indeed so vital is its role that it is little wonder it has adopted an almost spiritual role. We’re often told to follow our hearts – though this makes little sense in literal terms – and apparently that’s where home is as well. Part of the reason the Aztecs most commonly extracted people’s hearts as a form of sacrifice was their belief that it was the seat of the individual, more so than the brain, a belief shared by classical philosophers such as Aristotle.

In reality, the only bearing it has on our thinking and individuality is in its relationship with the brain – without the heart, the brain would be nothing. Normally about the size of your fist (unless you’re Donald Trump), it is made up mostly of muscle and comprises four chambers. Two of these called the atria and these sit atop the two larger ventricles, which do most of the pumping. The right atrium and ventricle take returning blood from the veins of the body and send it straight out to the lungs to be resupplied with oxygen. From there, the blood returns to the left atrium and then left ventricle, where it is given a final push into the body to do all of its good work. Generally it takes around 20 seconds for blood to circulate round the body before it gets back to the right atrium again.

To prevent back flow, there are several valves and, as these close, they cause the characteristic sound of your heart beating that we can listen to more closely using a stethoscope. Often we can pick up whether there is a bit of turbulence in the system if the valves are not functioning properly – ie a heart murmur.

If all is well, your heart will beat regularly and the signal for this comes from within the heart itself, from a collection of cells in the atria (called the sino-atrial node). Electrical impulses originate from here and spread like a circuit through the heart tissue, making the muscles contract in time with each other. In a lifetime, you can expect your heart to beat around 3 billion times, or 115,000 times a day. When the tissue that conducts these electrical impulses throughout the heart muscle is damaged, this can sometimes result in funny rhythms, or arrhythmias, of which there is a spectrum varying from serious to not so serious. Ultimately, the beating of the heart is governed ‘in house’ and though signals from the brain can stimulate it to speed up and slow down, the rhythm originates from the heart itself which is why, if a heart is removed from the body, it will continue to beat on its own for a little while.

Inevitably with such an important role, when things go wrong, we tend to know about it. In the past, infectious disease tended to be the leading cause of death but, since the middle of the last century, heart disease rose considerably, overtaking infectious disease (certainly in the developed world) as the biggest killer. However, due to plenty of research and advances in healthcare, in the last 15 years death rates from heart disease and stroke have reduced by about 50%. It is still the leading cause of death in males between the ages of 50 -79 years old and, though more common in men, heart disease is something we should all, including women, be thinking about.

Heart disease is a term thrown around a lot but what is it exactly? It falls into a broader category of cardiovascular disease which encompasses things like stroke as well. Essentially the main issue for any cardiovascular disease is the process in which arteries become blocked resulting in loss of blood flow to the areas these arteries supply. When the area that blocked arteries supply is heart muscle, we call this ischaemic heart disease. (Most strokes occur when blood supply is blocked to a part of the brain).

When an artery supplying heart muscle (coronary artery) is partially blocked, the heart needs to work harder as one exerts oneself. If the supply cannot meet the demand, this gives rise to chest pain which resolves when rested. This is angina.

When a coronary artery becomes blocked and blood supply is cut off completely, this results in chest pain not relieved by rest (often accompanied by nausea, shortness of breath, sweating and a feeling of impending doom), and areas of heart muscle can die. This is a heart attack, also known as a myocardial infarction. (myo = muscle, cardia = heart)

Following damage or weakening of the heart muscle (sometimes due to valve problems), the heart sometimes beats less powerfully than before and can result in reduced cardiac output that doesn’t meet the normal demands of the body. This can result in fluid build-up in the legs and reduced exercise tolerance and is known as heart failure.

The process that blocks the arteries is known as atherosclerosis which is essentially a build-up of fatty material that circulates inside your blood vessels. Over time, this atheroma gradually accumulates, like a natural dam in a stream, and restricts the blood flow, often without any symptoms until the last minute. Like many things there is no one cause for this but rather a group of risk factors that are commonly preached about by healthcare professionals but that are worth repeating here.

All of these are things that can be managed and optimised and are extremely important to consider, particularly if you have a family history of heart disease. If you are concerned about any of the above, it is always best to come and have a chat with your GP to talk about the best ways to reduce your risk of heart disease. Having a healthy heart doesn’t need to be more complicated than addressing the above factors and prevention is always better than the cure. 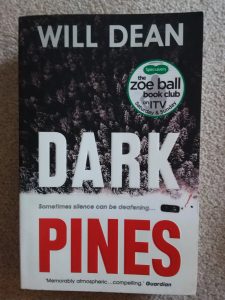 One of the most enjoyable novels I have read for a while. Perfectly paced, interesting characters and a genuinely good story. Also interesting, having just read a book on hearing loss, that the main character has to wear hearing aids. I didn’t plan that!

Love the author, Will Dean’s, bio as well… Having settled in rural Sweden, “he built a wooden house in a boggy clearing at the centre of a vast elk forest, and it’s from this base that he compulsively reads and writes.”