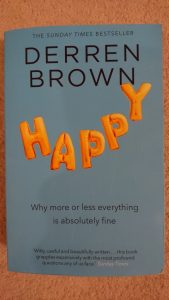 This book took me by surprise a bit. I already new how obviously clever and, might I say, wise Derren Brown was having read two of his other books in the past, so I knew this would be a good read. Any book that has been so highly praised by Stephen Fry is also always likely to be a winner. However, the subject and the way he deals with it was far more in depth than I had anticipated. It almost read like a philosophy text book at times, though that is no bad thing. I think it fitted with the book. Certain parts, particularly the sections towards the end focusing on death, though sounding a little morbid, were more rewarding that others and I would wholeheartedly recommend this book to anyone who is prone to feeling a bit low or has found themselves stuck in a bit of a rut. Equally, it is a cracking read for anyone interested in philosophy or who has, from time to time, pondered the meaning of life and our place in the universe.